Retail Disruptors – the spectacular rise and impact of the hard discounters

The rise of the hard discounters is a well-observed phenomenon of continuing research endeavour and commentary.  In the UK, as is well known, Aldi and Lidl have captured considerable market share over the last decade. 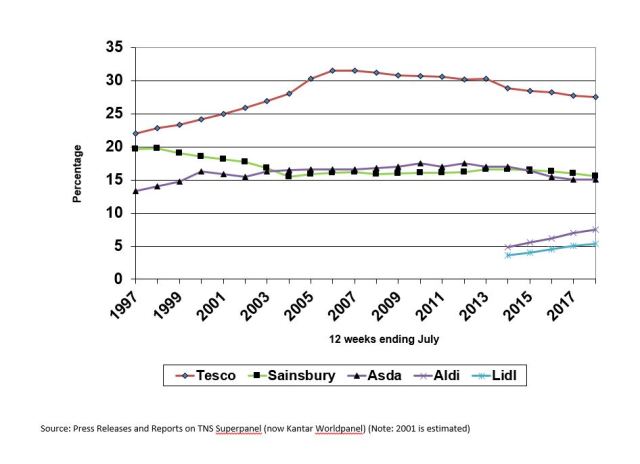 ‘Retail Disruptors’ by Jan-Benedict Steenkamp and Laurens Sloot is a new addition to the literature.  It focuses on the rise of the discounters generally and the reasons for and impact of their success.  It is very accessibly written, targeted mainly at the trade and professional audience.  The three sections of the book cover the strategies of the hard discounters followed in turn by the potential counter strategies for retailers and manufacturers respectively.  It attempts to adopt an international perspective and broad coverage, though inevitably this is a little partial. It is an easy and enjoyable read with the added benefit of being informative and at times thought-provoking, probably especially for practitioners including manufacturers.  These are often ignored in the consideration of the impact of discounters.

I did enjoy a reminder of the quote by the Tesco Chief Financial Officer from 2008 saying that ‘discounters were only having their moment in the sun’.  A decade on, sunburn must be an occupational hazard.  The reasons for this continuing success is well explored, but I do wonder about the constant refrain in the media (and this book) that even those with Audis and BMWs now shop Aldi/Lidl.  Car ownership is not what it was and many such vehicles are leased/rented, and so that much more prevalent than in previous decades.

I was also taken by the strong arguments for consumers welcoming the reduction in choice (as well as price) offered by Aldi/Lidl, and I would link this to the disruptive impact this has on local markets.  In the same way as Wal-Mart did in the US/Canada 20-30 years ago the arrival in an area of Aldi/Lidl recalibrates the local competition expectations.

The book concludes that discounters have a natural share of 20-25% but the exact outcome depends on the competition and the fight back.  For existing retailers a number of strategies are outlined (fightback, downgrade, value improvement and value redefinition) depending on the situation.  Details of these are well worth exploring.

If 20-25% is the natural share in the UK, then Aldi/Lidl will double in size in coming years.  That is enough to keep any Jack’s up at night!

I am Professor of Retail Studies at the Institute for Retail Studies, University of Stirling, where I research and teach aspects of retailing and retail supply chains, alongside various colleagues. I am Chair of Scotland's Towns Partnership. I am also a Deputy Principal of the University, with responsibility for Education and Students.
View all posts by Leigh Sparks →
This entry was posted in Academics, Aldi, Competition, Consumer Choice, Discounters, Food Retailing, Jack's, Lidl, Market Shares, Pricing, Retail Change, Retailers, Strategy, Uncategorized and tagged Aldi, Book, Competition, Consumer Choice, Discounters, Disruptors, Food retailing, Jack's, Lidl, Market share, Pricing, Strategy. Bookmark the permalink.