A Japanese Eataly? In Singapore?

Regular readers of this blog will recall that I have a bit of a thing for Eataly, the destination food retail and dining concept showcasing the best in Italian local, slow and seasonal products and other gourmet food and cooking. Whether in Turin or Rome, or indeed elsewhere in Italy and abroad, Eataly is a beacon of celebration of food and indeed life.

One of the questions I have posed on previous occasions is whether Scotland could mimic Eataly and produce our own showcase on food. After all, the quality of many of our food products is second to none and we could and should rightly celebrate this., We have the strong supporters of Scotland Food and Drink and they do a great job, but could we do more, a la Eatalty, on both food and restaurants. We have the produce and the people, so why not?

These thoughts came flooding back when I was in Singapore recently. Wandering through another of the new retail centres and spaces I came across Emporium Shokuhin. 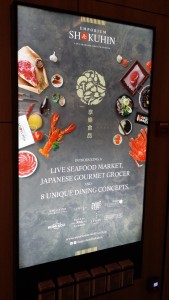 It had an impact – perhaps not quite that of the large Eataly stores, probably as, being Singapore, it is in a new build centre rather than re-using interesting and historical buildings (in rather short supply in Singapore). The Seafood Market was special and the Japanese Gourmet Grocer had some interesting links to specialist Japanese products and places. The restaurants were of high quality – well it would have been rude not to have tried some of them.

As a showcase to what I view as a Japanese approach to food, it had echoes of Eataly. But, it did not quite convince. Perhaps it was the newness or the lack of activity around (it only opened three weeks before our visit and many of the surrounding retail and other spaces were yet to open). Or maybe the core grocer concept lacked the fresh, local , seasonal and “slow” wow factor of Eataly. On the other hand the seafood market was a strong statement (but there are other less “western” seafood centres in Singapore and indeed in many hypermarkets) and the restaurants looked – and tasted – high quality.

The Seafood Market had imported product and not only from Japan. Most of the fresh slamon was Norwegian and I had to look hard to find smoked Scottish slamon amongst the competition.

I don’t know if it will succeed (and there are plenty of Japanese supermarkets catering for the Japanese and other communities in Singapore) or whether such a showcase can work as well outside its country of origin, but as a quality food statement I found it interesting and engaging.

And it made my mind return to the potential in Scotland and the missed opportunity we might be continuing to ignore. 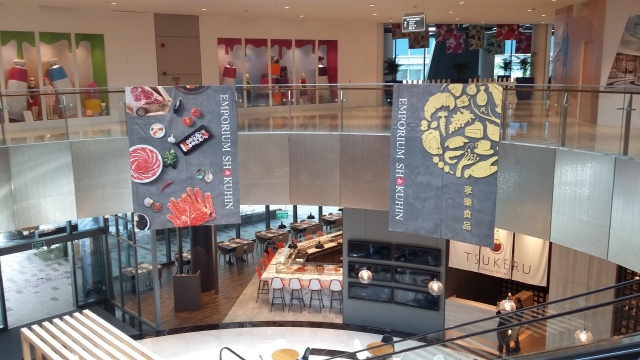 I am Professor of Retail Studies at the Institute for Retail Studies, University of Stirling, where I research and teach aspects of retailing and retail supply chains, alongside various colleagues. I am Chair of Scotland's Towns Partnership. I am also a Deputy Principal of the University, with responsibility for Education and Students.
View all posts by Leigh Sparks →
This entry was posted in Eataly, Emporium Shokuhin, Experiential, Food, Food Quality, Food Retailing, Gastronomy, Japanese, Markets, Restaurants, Scotland Food and Drink, Seafood, Shopping Centres, Singapore, Slow Food and tagged Concept Store, Eataly, Emporium Shokuhin, Food, Japan, Restaurants, Seafood, Singapore. Bookmark the permalink.

2 Responses to A Japanese Eataly? In Singapore?