Would the last person … please not arrive by car

Lots of media coverage yesterday for various data about the state of the Scottish high street and Scottish consumers. The headline seems to be that 1 in 9 of all Scottish shops are now vacant, though backed up with other recent figures about the lack of footfall in towns, the least disposable income for many years, slow consumer spending and a whole host of doom and gloom.

Buried in one report was a statement that the recession ended last January – but I somehow think that probably did not apply to Scotland, where many of the hard decisions about public sector workers, pay and service reductions have yet to come through the system.

Part of the coverage was about some of the novel ways in which high streets and local authorities could try to do something about their own situations. There have been some minor “cosmetic” works which have made places look better and maybe made possible businesses think about what could be an opportunity – opening up vacant stores for local schools or colleges, mocking up shop fronts to make it look like a store was there, and so on.

There are then the more substantive elements, in many cases funded by the Town Centre Regeneration Fund, such as the innovative Retail Rocks scheme in Torry, Aberdeen (and in which I declare the IRS at Stirling had some hand at the outset).

But on the flip side, there are then the negative things that are happening to our high streets and town centres. One of the most common of these seems to be the raising or the introduction of car parking charges for high streets and town centres. I am regularly sent cuttings about plans to increase the “take” from car parking, from centres across Scotland. The latest has been a steady stream of emails about Alloa, where there is a worry that the local authority wants to end the free local car parks and the local BID is fighting the proposals. 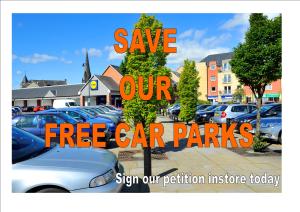 Whilst there are lots of things to debate about car use and costs generally, and I understand the problems cash-strapped local authorities are facing, it does seem a difficult time to be adding to the dis-incentives for people to visit local high streets and towns. Anything that makes it harder or actually/perceived to be more expensive will act as a barrier and have the effect of reducing the attractiveness of a place. Footfall and spending are in tough enough places already. Whilst car parking costs are not on the scale of petrol costs, they are seen differently, and centres that impose or obviously raise them at this time, may be a trigger to re-evaluate behaviours, and not in a positive sense for that town or high street.

It is a recurrent theme, but high streets depend on people visiting them and they make their decisions on the ways in which high streets and their competition satisfy or not their requirements. What makes this high street the place to go, and how can we improve the experience, whether in the short term or the medium term, should be questions at the forefront of everyone’s minds.

I am Professor of Retail Studies at the Institute for Retail Studies, University of Stirling, where I research and teach aspects of retailing and retail supply chains, alongside various colleagues. I am Chair of Scotland's Towns Partnership. I am also a Deputy Principal of the University, with responsibility for Education and Students.
View all posts by Leigh Sparks →
This entry was posted in BIDS, Car Parking, High Streets, Places, Retail Economy, Scotland's Town and High Streets, Town Centres, Vacancies and tagged Alloa, BIDs, Car Parking, High Street, Sales, Vacancies. Bookmark the permalink.