The retail headlines last week were interesting. Based on the latest Office for National Statistics retail sales data (for June 2020), the media packaged up a story about how UK retail sales had surged to pre-lockdown levels and were close to being normal (BBC, Reuters, The Grocer, Telegraph, Independent are amongst examples). The sense in many of the reports was of some return and stability/normality in retailing, now and in coming months. For obvious reasons, this is not an accurate reflection of the situation, nor indeed of the detail in the data that ONS presents in its report. Some of the media did manage to nuance the story but many people will have simply seen the headline/soundbite. As many retailers will readily tell you, “normal” and “pre-lockdown levels” are not the norm.

So, what did the ONS data show? It is worth remembering that this is data to the end of June, and that not all of retailing had re-opened across the UK at this time. It is also probably noteworthy that this might have covered what could be seen as a “honeymoon” period as many consumers ventured out. They may well have stocked up but with little intention to  return quickly. There is some anecdotal evidence that July has not been as strong a retail month as June (though if the weather has been as bad with you as here in Stirling in July, I don’t blame anyone for not going out).

The overall series as shown in Figure 1 below does suggest that June has moved closer to pre-pandemic levels and that we have a “V” shaped retail recovery. But that does not replace the lost sales of April-May and looking more closely does not reflect a return to normal. It is getting there, but is not anywhere “back to normal”. And the “V” shape may or may not hold. 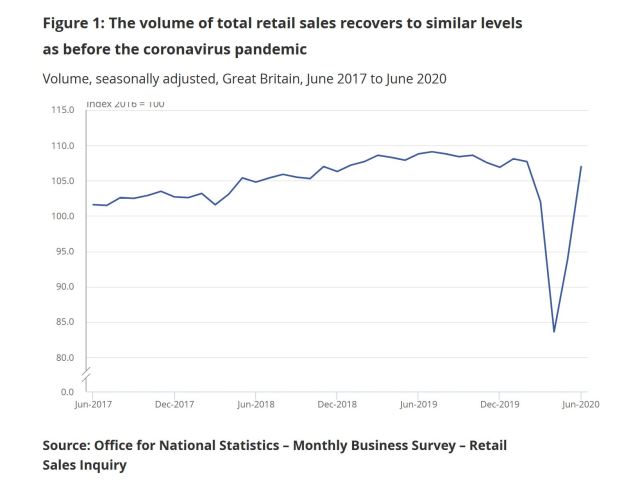 Looking below the overall fighure though, shows what we have known since lockdown commenced. Food retail sales have been very strong and if Figure 2 is anything to go by have settled down into a “new normal” pattern. Whether this will be sustained remains of course to be seen. This increase in food retail sales is attributable in no small part to the (until recently) continued lockdown and restrictions on food and hospitality places and also the new pattern of working from home. As was seen in the immediate inital phase of lockdown, a lot of food consumed outside the home had sudddenly to be purchased for in home consumption. This is only slowly altering and working patterns remian disrupted for many.

The other great change that has been rather obvious has been the strength of internet sales and online and home delivery. This has been a lifeline for some and whilst Figure 3 below shows remarkable growth, the level reached was itself constrained by capacity (despite huge expansion in some quarters). There has been a massive rise in online sales. There has also been a consequent rise in demand for home delivery services, with Hermes recently announcing an expansion of 10,000 jobs (These jobs though may not be accounted for as retail in the national data). 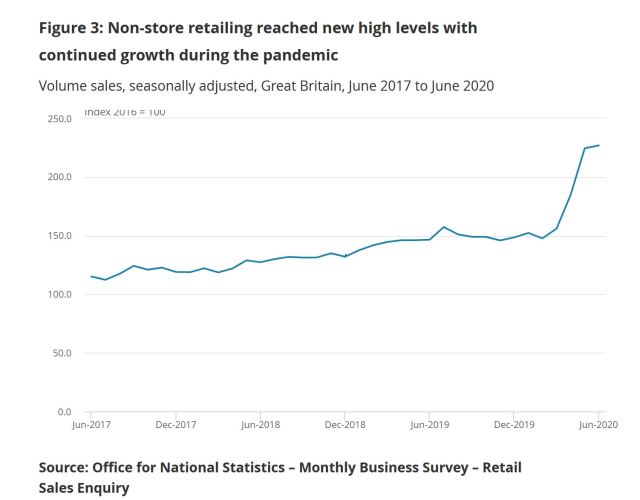 The final graph I have taken from the ONS though tells a slightly different story about online sales. Whilst the proportion of sales online has remained above 30% for June, it has fallen back from May. This can derive from more people being able to go to the shops and thus returning to physical stores and swtiching from online, but also a general expansion of retail sales physically as stores re-open and thus the proportion of sales being online falling, even if the volume remains high. This will be a figure that will be watched closely in coming months.

There is far more to be gleaned from the ONS data than covered here and certainly covered by the media. There can be little doubt that we are still in strange and volatile times and that retail sales are going to be both heavily watched and variable in many ways over the coming months. One particualr thing did catch my eye though; the data report also shows that a reasonable proportion of retail stores (and it varied by sector) was not open in June. This begs a number of questions about what is happening. Will these stores re-open? With not all stores open and yet sales “back close to normal” does this suggest that some stores and businesses have, and are, doing very well (at least in sales terms)? We know this is true for food vs non-food, but variations exist both within and between sectors and locations.  In short, sales is one important measure, but the volatility and alteration is such that understanding the underlying reality is going to take much longer.

I am Professor of Retail Studies at the Institute for Retail Studies, University of Stirling, where I research and teach aspects of retailing and retail supply chains, alongside various colleagues. I am Chair of Scotland's Towns Partnership. I am also a Deputy Principal of the University, with responsibility for Education and Students.
View all posts by Leigh Sparks →
This entry was posted in Consumer Change, Covid19, Data, Food Standards, Home Delivery, Internet shopping, Lockdown, Office for National Statistics, Online Retailing, Retail Change, Retail Sales, Sales, Shopping, Uncategorized and tagged Covid-19, Food retailing, Home Delivery, Internet Sales, Lockdown, Online shopping, ONS, Retail Sales. Bookmark the permalink.