The significance of shopping centres across Scotland is undeniable and has been the subject of interest for Scotland’s Towns Partnership (with REVO and DWF LLP), as this blog has noted before.  Last week the same partners brought together a range of public and private interests (shopping centre companies/managers/experts, COSLA and local authorities, the SNIB and Scottish Enterprise) to try to take the agenda for change forward.  We were also lucky enough to get an hour of the Cabinet Secretary Aileen Campbell’s attendance and engagement, signifying Government’s interest in the subject. 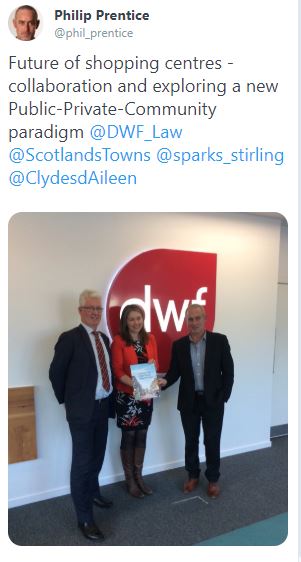 Amongst various scene setting presentations/provocations, Stuart Moncur, National Head of Retail Savills, set out the state of the shopping centre industry.  He pointed to over 100 identifiable centres in Scotland, but noted that most had been developed before 2000.  Since then growth had been slow, with St James’ the exception not the future.  The point being made is that the shopping centres we have were built for a very different time, tended to be of particular forms and were now often somewhat diminished assets.  Across Scotland, as in retail generally, we have too much space, not doing what is needed.  In some Scottish towns we have two centres where only one is needed.

This reality is a known one, so the issue is the barriers and opportunities to get collaboration to repurpose, downsize and re-energise these centres, so they perform for the town as a whole.  Debate on this from the audience came at the issue from different angles, but despite some superficial tension, in reality public and private sectors are after the same thing; a re-energised successful town centre.

Each circumstance is different and towns and centres are in different situations across the country.  This makes it critical that local engagement, planning, collaboration and funding is developed; national schemes don’t help here.  These local engagements are the lasting outcomes of this STP work and will hopefully lead to some exciting repurposing.

A similar topic was pursued in an evening session arranged by REVO.  Here, I was on a panel with Phil Lawrence, Executive Director of Place Edinburgh City Council, Emma Mackenzie (Head of Asset Management, New River and Phil Prentice (STP).  Emma had also presented on New River’s approach at the earlier session.

Others can better assess the panel session as a whole and any contribution I made, but it was interesting and enjoyable listening to Paul’s reasons and hopes for Edinburgh and having the chance to think more long-term about some of the changes we will need to make to property and behaviours if we are to achieve our carbon neutrality targets.  Such changes will provide an existential threat to some activities in some places and the sooner we start moving on this the better.  For towns this is a real opportunity.  For shopping centres in towns, owners and managers need to focus on how the centre (in whatever future form) can help the town as a whole – enhancing social value rather than pursuing only extractive economic value.