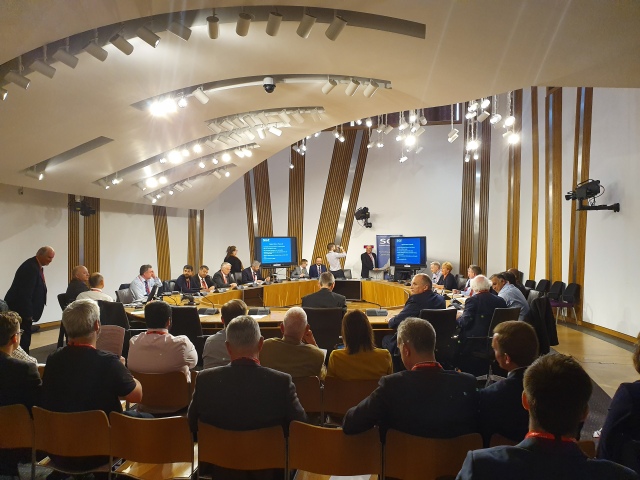 I am in the fortunate position of being able to get involved in two Scottish Parliament Cross Party Groups; one on Towns and Town Centres linked to Scotland’s Towns Partnership, and one on Independent Convenience Stores linked to the Scottish Grocers’ Federation.  They provide a forum to discuss issues in these areas and to engage with MSPs and others on matters of concern.  Such access and openness is a benefit of the Parliament and being located near enough to get involved.

In most cases my involvement has been on topics I know something about and I have presented on occasions on policy and our work.  But the latest meeting in the CPG on Independent Convenience Stores was a little different.  It focused on the hot topic of Deposit Return Schemes in Scotland and the potential impact on small convenience stores.  It was different in that it was a topic on which I was aware there was an issue but really knew little.  So I sat at the back, listened and used Twitter to take some notes (see @sparks_stirling for the 21st May).

The Cabinet Secretary, Roseanna Cunningham opened the session by drawing attention to the Government’s recently published policy (see the consultation process and responses here, the debate in parliament here, and the Full 150 page Stage 1 business case here) but also the Government’s openness for further input on operational and implementation matters.  She was followed by a variety of scheme/system promotors and Scottish retailers who had been involved in trials over the last few months promoted by the Scottish Grocers’ Federation.  It is I think a mark of the enhanced role and capability of SGF that such things are now the norm in the sector.  A slightly heated Q&A session followed and we were so engrossed we ran out of time.  The fact it was a packed room (mainly of convenience store retailers) was an indicator of the significance of this issue.

So what did I take away from the event?

I am not sure that I captured all the sentiments and points of agreement and disagreement, either above or on Twitter. As was said at the outset, the policy direction is now set, and many are in favour.  But the devil is in the detail, especially for independent convenience stores, and so the implementation and consultation phase still has a number of possibilities and could end up problematic.  It will be interesting to see how this works through and settles down.