On the 25th April, it was announced that Feargal Quinn the legendary Irish retail businessman, founder of Superquinn, had passed away.   The President of Ireland said

There have been many tributes and obituaries to him in the days that have followed, including in the Irish Times, the Irish Examiner, The Times, Irish Independent, and RTE. Tesco Ireland took out a full page advertisement in the Irish Times Business: 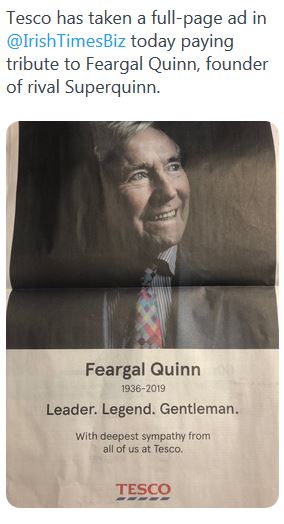 There is little point in repeating here what others have said so eloquently.  He transformed Irish grocery retailing and was ahead of his time in many retail respects. It was a privilege to have met him and his family and our sympathies are extended to them at this time.

Feargal was an honorary graduate of the University of Stirling and in November 2012, Steve Burt, Professor of Retail Marketing and then Senior Deputy Principal of the University presented the laureation at our winter graduation ceremony. I re-produce it below.

“Chancellor, Principal, Members of the University, Graduands, Ladies and Gentlemen, Senator Feargal Quinn will receive the award of Doctor of the University in recognition of his outstanding contribution to entrepreneurship, business and management.

Senator Feargal Quinn is an Irish businessman and an independent member of the Seanad Eireann, the Senate component of the Irish National Parliament. Born in Dublin in 1936, he was educated in Newbridge College, County Kildare, and graduated from University College Dublin with a degree in Commerce. He is married to Denise Quinn, and they have five children and 14 grandchildren.  There is already a strong family connection with the University of Stirling because his son, Eamonn Quinn, is a successful Stirling MBA graduate.

As a child, Feargal received an excellent education in business and hospitality management from his entrepreneurial father, who set up the Red Island Holiday Camp at Skerries, County Dublin. Feargal spent his school breaks at this holiday camp, working as a waiter, a bingo caller and all manner of other miscellaneous jobs. With hindsight, he was experiencing an invaluably broad range of work-based learning opportunities which would later inform his successful adult business enterprises.

The most well-known of these is his establishment of the Superquinn supermarket chain, which began over 50 years ago when he opened his first store, aged 23. He went on to become the executive chairman of a chain of over 20 supermarkets with around 6000 employees. He is currently non-executive president after his family sold out their interest in August 2005.

Superquinn built a reputation for innovation. In 1973, for instance, it pioneered the idea of in-store bakeries, now a common place feature, but a novel concept 40 years ago. In fact, Superquinn piloted numerous world-leading retail technologies, including self-scan shopping, multifunction kiosks, digital shelf labels, and mobile checkout technology.  Of  equal value were the less hi-tech developments; the introduction of the Superquinn playhouse scheme, for instance, equipped stores with professionally staffed playhouses, allowing parents to leave their young children in a safe, enjoyable environment during shopping trips.

Feargal gained recognition for his effort to make shopping a pleasant customer experience. Long before it became common practice in retail management, he would get up early, six days a week, to meet and greet customers on the shop floor, listen to their comments and act on any points that were raised.

Once Superquinn had been established, he was head-hunted to run what became An Post, one of Ireland’s largest companies, for ten years.

Feargal’s experience and knowledge of retail and business have earned him tremendous respect among aspiring entrepreneurs, and positioned him as one of Ireland’s most popular business trouble-shooters. His bestselling book Crowning the Customer, is used by multi-national companies as the essential guide to customer care. Additionally, his popular television series “Feargal Quinn’s Retail Therapy” has allowed him to use his huge talents to help smaller, fledgling businesses find success in recessionary times.

Feargal has often repeated his famous retail mantra: “I listened, I learned, I discovered”. This humble and compassionate approach to the customer experience is, for him, the simple secret to his success.

Feargal’s personal success has kindled his genuine interest in young people’s education and employment opportunities. In the mid-nineties, he played a pivotal role in one of the most important reforms in the Irish education system, when he chaired the steering committee overseeing the development of the Leaving Certificate Applied. This self-contained two-year learning programme prepares students for adult and working life.

He is a former President of EuroCommerce, the Brussels-based organisation representing retail, wholesale and international trade across Europe. He also held the position of Chairman in Ireland’s National St Patrick’s Day Festival. Currently, he serves on the board of directors of CIES – the Food Business Forum based in Paris as well as the American-based Food Marketing Institute.

He has received three honorary doctorates, was the winner of a “People of the Year” Award in 1984, and is the recipient of the French Ordre National du Mérite and a Papal Knighthood.

Senator Feargal Quinn has played a fundamental and pioneering role in retail, international trade and entrepreneurship for over half a century. This, coupled with his substantial contribution to culture and politics within Ireland, makes him a worthy recipient of the degree of Doctor of the University. ·

Chancellor, in the name and by the authority of the Academic Council, I present to you for the Honorary Degree of Doctor of the University, Feargal Quinn.” 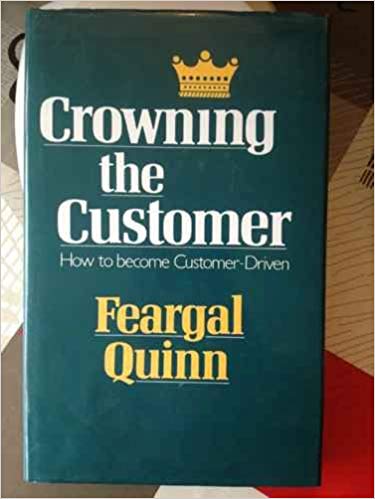 25 years after its initial publication it is still relevant today

I am Professor of Retail Studies at the Institute for Retail Studies, University of Stirling, where I research and teach aspects of retailing and retail supply chains, alongside various colleagues. I am Chair of Scotland's Towns Partnership. I am also a Deputy Principal of the University, with responsibility for Education and Students.
View all posts by Leigh Sparks →
This entry was posted in Alumni, Consumer Lifestyle, Customer engagement, Customer Service, Food Retailing, Ireland, Retail leadership, Retailers, Retailing, Supermarket, Superquinn, Uncategorized, University of Stirling and tagged Customer service, Entrepreneur, Feargal Quinn, Honorary Degree, Ireland, Retailing, Superquinn, University of Stirling. Bookmark the permalink.