Three Go To An Exhibition

It was not quite my shortest visit to Singapore, but it came close; a couple of days launching a new partnership with Amity University and our annual graduation ceremony with SIM.  For reading on the plane I had grabbed a book from my desk which I’d been meaning to read for some time – Silence of the Archives by David Thomas, Simon Fowler and Valerie Johnson.

My interest in the book stemmed from our experiences of trying to recreate Sanders Bros; a major inter-war food retailer which left no archive after it was taken over and broken up.  We have been trying to accumulate as many artefacts and details as we can.  Whilst this process is easier now in the digital/internet era than it was, it still leaves questions over the meaning of the surviving pieces, their interpretation, but also what can not be found anymore.

As the Silence of the Archives debates, what is in an archive or collection, and what is not, and why, are vital questions for all of us in many contexts.  Little is truly value-free.

This took on particular relevance, as en route to the flight back, I took in (together with two retail colleagues) an exhibition at the National Library of Singapore entitled Selling Dreams: Advertising in Early Singapore.  We spent a fascinating 90 minutes or so looking around.

The artefacts used – mainly print and visual material – are taken from the National Library Collection.  The exhibition explores the advertising approach in the early years of Singapore.  Most is historical or pre-dates independence, with little after the 1960s.

Much of the exhibition allows a consideration of the early life of Singapore as seen via advertising.  This is focused on colonial times; the aspirations of ex-pats and the creation of society form a theme, as do the issues of living in a tropical, developing country.  As the imagery shows, themes of home country and identity are pervasive.

Our interest was a retail one of course and the exhibition contains much of interest.  A section on the grand department stores shows the building of retail Singapore and the colonial lifestyle.  More interestingly a section on the adverts of the lost shops of High Street provides a different window on retailing than seen in Orchard Road which supplanted High Street. 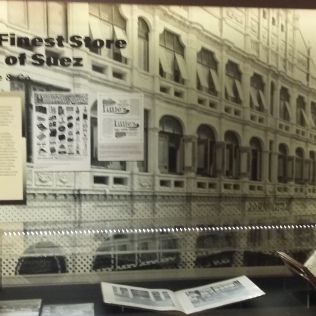 A couple of items allow a glimpse of what Orchard Road was – a taxi office at 1 Orchard Road for example and a provision shop at 223 (photo from 1965). 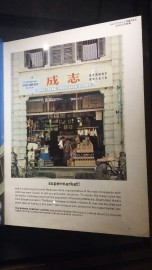 There are other themes that could be explored and some are seen in the slide show below, not least what is acceptable in advertising now as opposed to ‘then’. Still not convinced about Durian Jam though.

Whilst the entire show is not given over to colonial theme, it is a focus.  This may be due to design, but it also probably stems from what is in the National Collection.  A dominant focus is commerce (as the second issue of the Straits Times and its shipping (and retail advertisements) show) and commerce was obviously a colonial occupation.  Voices of others – for example the consumers of the stores, grand or especially otherwise – are routinely not heard and have been lost. 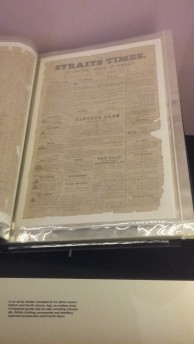 I have made a linked point before in discussion of my Argos catalogues.  Viewed as ephemera by the British Library, they were deemed unworthy of presentation.  But what a window on changing products and consumers they can provide.  Choices of inclusion or exclusion will set challenges for the future.

If you are in, or passing through, Singapore, go along and take a look.  You might, like us, bump into one of the designers/curators of the exhibition.  He asked why we were looking at the retail section so intently.  Our answer – we are three retail academics – rather unnerved him I think.  But who knows, perhaps they will think in the future about an exhibition on Singapore’s retail history.  One of my colleagues has thousands of photos from the mid-1980s onwards and can be encyclopaedic on retail changes in the last 30 years.  It would be a shame if this ‘window’ was also lost.

I am Professor of Retail Studies at the Institute for Retail Studies, University of Stirling, where I research and teach aspects of retailing and retail supply chains, alongside various colleagues. I am Chair of Scotland's Towns Partnership. I am also a Deputy Principal of the University, with responsibility for Education and Students.
View all posts by Leigh Sparks →
This entry was posted in Advertising, Architecture, archives, Department Stores, Historic Shops, History, Retail Change, Retail History, Retailers, Singapore, Urban History and tagged Advertising, archives, Colonial, Department Stores, Exhibition, Malaya, Retail, Retail History, Singapore. Bookmark the permalink.