2017 was the 50th Anniversary of the opening of the University of Stirling. There were a number of celebrations and activities, as well as periods of reflection. One of the events on campus was an exhibition about 1967. This involved items from our collection being brought together, as well as reflections by various academics on the events of 1967 in their own subject areas. These reflections are still going on.

In my case, I was asked to write about retail events in 1967 and my comments were put on display. What I had missed however, was that they were also made available in a blog. Having just seen this (my fault entirely), I have reblogged the piece below (thanks to Sarah Bromage) with some additional links. 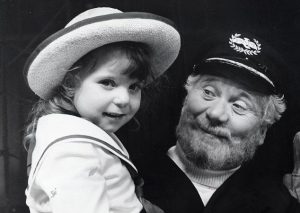 Retailing 50 years ago would in many ways be familiar to people today, but in other ways has been utterly transformed. The act of shopping is predominantly the same, though the stores and shops are very different. The pre-decimalisation, cash not credit card focused retail sector, operated mainly through small shops in local high streets organised in a rigid urban hierarchy. The out-of-town retailing revolution was just beginning, with the concepts of superstores and regional shopping centres in their infancy. Consumer durables were being transformed into mass commodities. The refrigerator was spreading across homes, accounting for the 1967 introduction of Captain Birds Eye as the ‘face’ of fish fingers. Cars were becoming everyday items and Asda’s first discount petrol station was introduced in Halifax to their ninth store. More widely there was debate over whether self-service petrol stations were safe and would be introduced generally. Travel and distance would never be the same, including for shopping.

1967 was a pivotal point in the retail revolution. The changing operations and locations/forms might be in their infancy, but the price revolution was being hotly contested. Resale price maintenance (RPM), by which manufacturers and suppliers controlled the retail prices of products, had been abolished in 1964. However exemptions could be sought through the courts and 1967 saw legal battles to remove or retain RPM in products as diverse as cigarettes, sweets and electrical items. A recurring fear expressed in court was that unfettered price competition by retailers would advantage the new supermarket companies and lead to the death of small stores such as confectioners. This was a battle over which mattered more, small shopkeepers or consumers.

Prices were also in the news at the end of the year as the pound was devalued. Harold Wilson notably commented that ‘it does not mean that the pound here in Britain, in your pocket or purse or in your bank, has been devalued’. This response to trade deficit, increasing unemployment, falling productivity, a weak economy and creditor pressure, did stoke inflation and thus impact demand and shops. The state of the economy was also why actions to reduce prices for consumers was significant. This sounds all too familiar today.

On the 25th May 1967 Princess Margaret and Lord Snowden formally opened Phase I of the Cumbernauld Shopping Centre. This huge multi-storey building (a ‘megastructure’) acting as a town centre, including retailing, was reported as the UK’s first shopping centre, though it was much more. Certainly it was the first of its ‘type’. Built over a dual carriageway the new centre consigned the old urban ways to the past, separating functions and focusing all urban retail in the one place, at the pedestrian heart of the settlement. Voted Britain’s most hated building in 2005 and a serial winner of the worst town centre in Scotland’s Carbuncle Awards, the 1967 promise of a ‘town for tomorrow’ never really lived up to the vision. Its approach though does live on in our regional shopping centres. 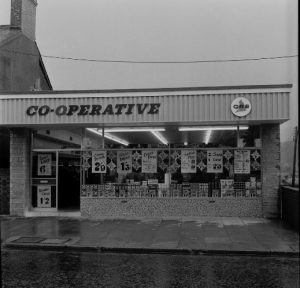 It may be hard to believe nowadays but in 1967 the Co-op was a retail giant with a large and significant market share (My Special issue “History” of the Post-War Co-operative Movement from 1994, can be downloaded here). It had been battling to modernise for a decade as competition increased, but in 1967, significant steps forward were made. A young, dynamic, external appointee, Philip Thomas became Chief Executive of the Cooperative Wholesale Society, sparking board resignations. Thomas promoted radical merger and reorganisation and, throughout the year battles were waged over his proposed future direction. Consolidation and merger of the very small local Co-op societies in order to compete with the national chains and brands did accelerate. Thomas died in an accident in 1968 and is widely regarded as the ‘lost leader’ for the Co-op, raising questions of what might have been if his plans had been followed through at the pace he proposed.

One legacy however from Thomas, announced in December 1967, and launched with an advertising campaign in early 1968, was the introduction of a national brand for the Co-operative (‘the clover leaf’), replacing the myriad of older local and other symbols, trademarks and brands. It became a brand icon for several decades, but could not stem the Co-op decline on its own. In 2017 an updated version of this famous brand was brought back to lead the business. 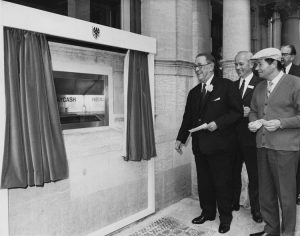 The Hole in the Wall

The summer of 1967 might be known for many things, but quietly, at a Barclays branch in Enfield, on the 27th June, the world’s first public cash machine or ATM was unveiled. Conceived as a convenience to enable access to cash outwith the (restricted) bank opening hours, the cashpoint has revolutionised consumer access to cash and indeed banking itself. The Barclay’s ATM was a limited, token based, system producing a maximum of £10 on the use of a four digit PIN, and has clearly since grown in sophistication (though now under threat from cards and contactless payments). 1967 is thus the start of the consumer and banking card based revolution.

I am Professor of Retail Studies at the Institute for Retail Studies, University of Stirling, where I research and teach aspects of retailing and retail supply chains, alongside various colleagues. I am Chair of Scotland's Towns Partnership. I am also a Deputy Principal of the University, with responsibility for Education and Students.
View all posts by Leigh Sparks →
This entry was posted in 1967, ATMs, Cashpoints, Consumers, Cooperative Group, Cooperatives, Corporate History, Cumbernauld, Fish, History, New Towns, Pricing, Retail History, Shopping Centres, University of Stirling, Urban History and tagged 1967, ATMs, Co-operatives, Cumbernauld, Devaluation, Fish Fingers, Retailing, Shopping Centres, University of Stirling. Bookmark the permalink.