The Lost Broch of Stirling

I am not sure what it says about me, but I have been seduced into some small crowdfunding projects over the last few years.  The subjects have been food, drink, rugby and history, so maybe I do know how and why this reflects on me!

As I have reported here before I put a small amount into Incredible Edible to help the book get published.  Before that a couple of start-up breweries and more latterly some bakery/grocery start-ups attracted my meagre contribution, as have a couple of hydro power schemes.   I was not really seeking any return or recognition, but wanted instead to encourage some small and community projects.  Perhaps it’s my version of betting?

Most recently I contributed to a University of Stirling crowdfunding exercise – the Peter Mackay Archive – mainly because I felt such things are important and it ties in to some places and issues that were important to me as a student.  Rather unexpectedly, I received some negative comment about this when I tweeted about the appeal, on the basis that Universities and their Principals are rich enough to fund such things themselves.  Ah well!

Out of the blue this week I stumbled across the Lost Broch of Stirling (Thanks to a @theBEFS tweet).  I will probably contribute, not least as it is such a remarkable (if rather sexist) story, and the ‘dig’ site is just round the corner from where we live.  If you don’t know the story of Christian Maclagan (and I did not) then check out the blog here.  If you don‘t know what a Broch is then see the end of this post.  Put simply Christian Maclagan discovered an urban broch in Stirling in 1872, but was denied membership of the Society of Antiquaries of Scotland as she was not a man and could only publish her key paper on the site after it was transcribed by a man.  A dig at Maclagan’s site will go a long way to confirming her reputation and righting a Victorian wrong.

This did make me reflect a little on what such crowdfunding exercises offer by way of return, though for me that is not the point and most have been anonymous contributions.  The Lost Broch is a reasonable example.  At various crowdfunding price points it offers:

Basically these are experiences or items which can not be bought in any other way.  They provide either a degree of exclusivity and/or uniqueness or an experience that is not available in the normal ‘shop’.  At a time when quite a lot of retailing is being confronted by declining sales or reducing rates of increase of sales and the idea of ‘peak stuff’ is being seen/heard more often, this offer, like so many others focuses on experience/individuality as a point of differentiation or engagement.

This is of course not new and retailers have been trying to add experiences to retail for a long time.  It has perhaps become more stark now as consumers get bored with the ‘same old, same old’, can do much functional shopping electronically (and get immediate (well almost) gratification), can shop the world from a smartphone, and attention spans have decreased considerably.  Instead the search is about a sense of difference and a personal experience (though no doubt shared in the right social media), but this does not come cheap.

Given I can dig my own garden every weekend and my knees are those of knackered 70 year old, I’m not sure I am up for learning archaeology, in a trench, around the corner.  But, Christian Maclagan’s story and the Lost Broch of Stirling grabbed my attention and interest.  I wish them well and hope others can also contribute and gain pleasure from involvement and experience.  Just knowing it is going on, that people care, and being kept informed, is fine for me.

The big question for retailing though is how retailers can compete with such benefits now on offer more widely and how you might structure the ‘rewards’ to give that sense of personalisation and experience.

Brochs are tower-like structures unique to Scotland, dating from c2000 years ago.  They are the only extinct prehistoric buildings in north-west Europe to demonstrate multiple floors. 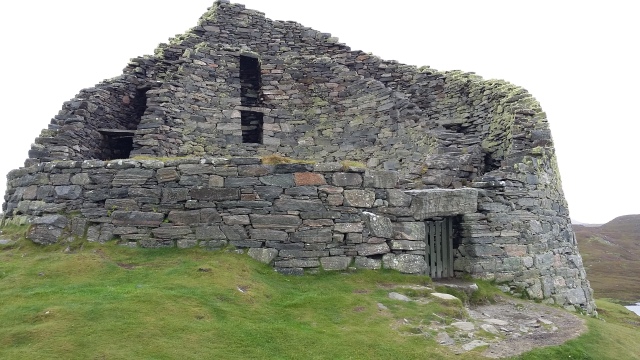