Taste the Landscape with Scotrail

I’ve always enjoyed travelling by train.  Maybe this stems from my grandfather being a blacksmith by trade and when I was young seeing him working on steam engines in Tondu sheds.  Or perhaps it comes from being packed off on my own on the train as a 7/8 year old to go from South Wales to Devon to holiday with my grandparents – and being looked after on the journey by various guards and others – a railway ‘unaccompanied minor’, and an early sense of adventure.

But these days my train journeys are mainly limited to the Central Belt, with occasional excursions further afield.  I must have been lucky on these as my trains seem to run to time and be efficient, though why it takes longer to get to Edinburgh from Stirling now than it did when I first moved up in the early 1980s is a shameful failure of scheduling.

All this though is by the by.  Whilst Scotrail has not had its troubles to seek in the latter part of 2016, on a recent journey to Aberdeen I was given their Taste the Landscape food and drink menu.  Now railway catering has in the past been the stuff of nightmares and must be a thankless task on busy, crowded services, but this menu seemed a genuine attempt to offer an alternative to things gone by.

The basic premise is simple enough; a showcase of Scottish products.  The “standards” are there – Tunnock’s, Mackie’s, Nairn’s, Irn-Bru – but there are also some newer local producers (Brewdog, Stoats).  Scotrail get around our lack of some alcohol production and wine, by using importers based in Scotland.  The tea and coffee likewise is only brewed with Scottish water.  I won’t comment on the pricing or the sizing/value, but the intention is one that should be applauded.  Moreover there’s not a deep fried Mars bar in sight and the Irn-Bru picture is of the Sugar Free variety.  That’s some progress I feel, though much more could be made. 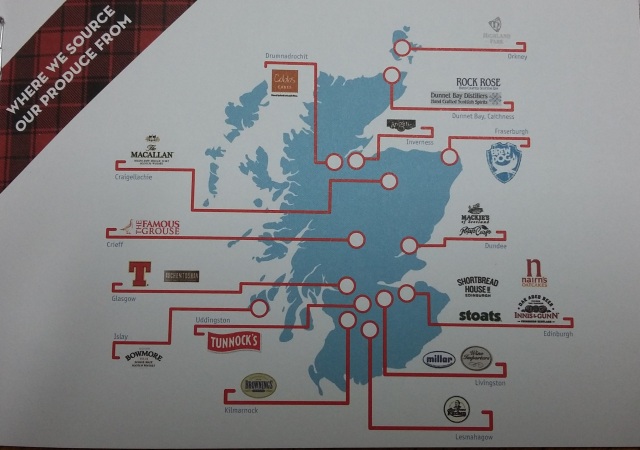 I post this on a day when it is announced that exports of Scottish Food and Drink have reached a record high of £5.5bn. It is said they have doubled since 2007, with a particular focus on the European Union. James Withers, chief executive of Scotland Food & Drink, said the latest export figures were “fantastic news” and that “The game-changer has been developing a national brand for Scottish produce in export markets, with industry and government working hand in hand to invest in overseas trade experts and activity. If we now further deepen that work, this success story has much further to go.”

This is excellent news – though how long it will last given the potential fall-out of Brexit is hard to say – but it did make me think. We have recently been doing some research for Food Standards Scotland (of which more in coming weeks) commissioned because of the stubborn refusal of the Scottish population to improve diet towards the Scottish diet targets. Now some of our export products need to be taken in moderation, but amongst our successes are great food products. Why can’t we also have a “game-changer” around the consumption of Scottish products as part of an enhanced national diet?

I am Professor of Retail Studies at the Institute for Retail Studies, University of Stirling, where I research and teach aspects of retailing and retail supply chains, alongside various colleagues. I am Chair of Scotland's Towns Partnership. I am also a Deputy Principal of the University, with responsibility for Education and Students.
View all posts by Leigh Sparks →
This entry was posted in Advertising, Alcohol, Brexit, Diet and Health, European Union, Food, Food Tourism, Producers, Retail brands, Scotland Food and Drink, Scotrail, Suppliers and tagged Brands, Brexit, Diet and Health, Europe, Food and Drink, Scotland, Scotrail, Scottish Food and Drink. Bookmark the permalink.

1 Response to Taste the Landscape with Scotrail