I sometimes wonder what visitors make of Scotland. When I first moved up we did a lot of the tourist things, as people and family visited, but as life goes on it is all too easy to look to further fields and ignore some of the things we have on our doorstep. So, reversing that is how we ended up in Edinburgh last Saturday.

When I booked I had not thought about the significance of the date. The 2nd of July seemed innocuous and promised to be reasonable in terms of the weather. Wrong!

Edinburgh was pretty busy due to the Queen’s opening of the Scottish Parliament that morning. The afternoon was given over to the Pride Edinburgh march down the Royal Mile, which at least provided a splash of colour of what was a very dreich day. Though dreich understates it – it hosed down at time, with added thunder and lightning, and it was also arctic in terms of temperatures. I readily remembered why I tend to look to other countries for breaks!

So, it was not exactly the best afternoon to have booked a walking tour of the Hidden Gardens of the Royal Mile. Wet with added parades. 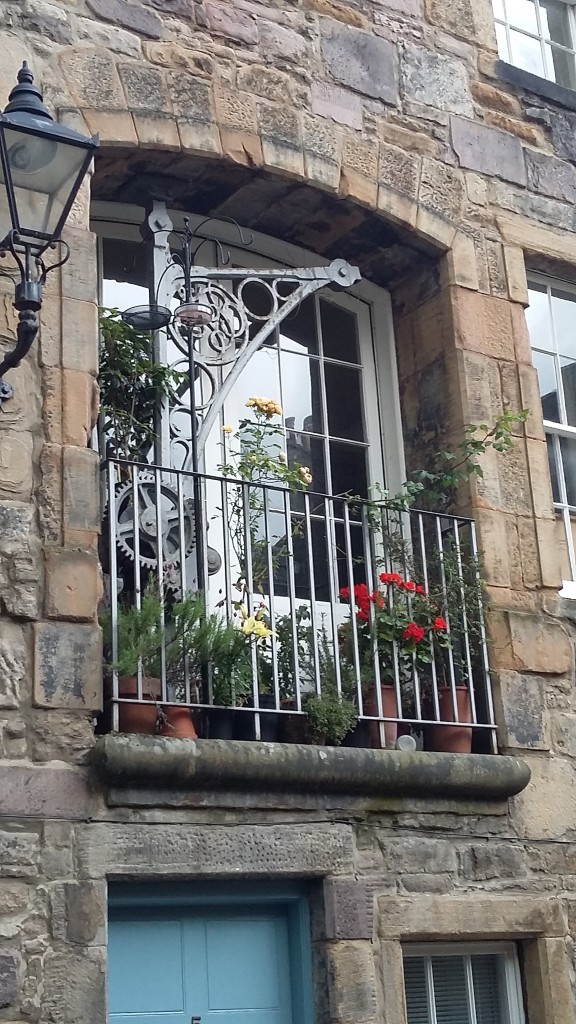 It was, despite the rain and the need to cross the parade route on occasions, a really interesting tour. Starting at the Story Telling Centre we wove our way through various closes along the Royal Mile. Some of the gardens were public; others were private. Many of the them had community involvement. The bust of Patrick Geddes in the garden at the back of the Story Telling Centre was our starting point, both physically and conceptually. Geddes’ view of space and community provided a guiding spirit.

In the end the tour had to be abandoned, such was the rain and the throng by the Parliament, but the various gardens we visited provided both thought (we are actually planting the right things at home) and discussion (how do we keep community involvement alive in such fragile, mobile times?) We saw some really neat spaces and learned about the relationship of space to the buildings and history.

The July weather though needed to be tackled head on, which is why an hour or so later we found ourselves at the Pickering Gin distillery at Summerhall for their guided tour. “Guided tour” is a bit of a misnomer as the distillery is only three small rooms in the old Royal Dick Vet School. Instead it was more like a conversation with a knowledgeable friend – with added gin. A forty or so minute discussion of the origins and history of gin, followed by the story of how to distill and add flavour to it, and then various tastings of the final product provided a suitably warming end to the day.

Small batch craft gin has become something of a trend and Scotland has more than its fair share. This becomes easier to understand after seeing Pickering’s example – it is very different to the investment needed for whisky for example. That is not to say it is easy, far from it, but it becomes more understandable. A really interesting tour and discussion. The gin was good too!

The Hidden Gardens tour was very much Scottish focused and attracted “locals”. The Gin tour was a mixture of Scots and visitors. Both tours had their retail component – a book on the Hidden Gardens in the former and bottles of gin in the latter. No prizes for guessing which I bought.

Hidden Gardens of the Royal Mile tour was by Greenyonder Tours and will be running again during the Edinburgh Fringe Festival (book early as it has sold out the last six years).

Pickering’s Gin can be found at the Summerhall Distillery in Edinburgh – details of tours here.

Both can be thoroughly recommended – though arranging a dry day is perhaps advisable, but only in one sense of the word.

I am Professor of Retail Studies at the Institute for Retail Studies, University of Stirling, where I research and teach aspects of retailing and retail supply chains, alongside various colleagues. I am Chair of Scotland's Towns Partnership. I am also a Deputy Principal of the University, with responsibility for Education and Students.
View all posts by Leigh Sparks →
This entry was posted in Alcohol, Architecture, Buildings, Community, Distillery, Edinburgh, Festivals, Gardens, Gin, Historic Shops, Royal Mile, Scotland Food and Drink, Spaces, Urban History and tagged Distillery Tours, Edinburgh, Gardens, Gin, Pickerings, Royal Mile, Walking Tours. Bookmark the permalink.

2 Responses to Gardens and Gin