Retail change and why we fell in love with supermarkets?

My long-term colleague, Anne Findlay has just sent me a newspaper clipping that she recently found in her parent’s house. A quick bit of research (or Googling as we now call it) dated it to February 7th 1962. Anne knew it had been written by her mother and published in the Glasgow Herald, and that it was her mother’s reflections on the differences between American and British (Scottish) food retailing in the late 1950s and early 1960s i.e. a period of real transition in the British food retail scene (RPM was breaking down, discounting emerging fully and Tesco entered the Guinness Book of Records in 1961 when it opened its Leicester supermarket – the then largest such store in Europe at 16,500 sq ft). Anne had lived for a couple of years of her childhood in the US in Durham, North Carolina and then in Berkeley, California.

The clipping is reproduced below: 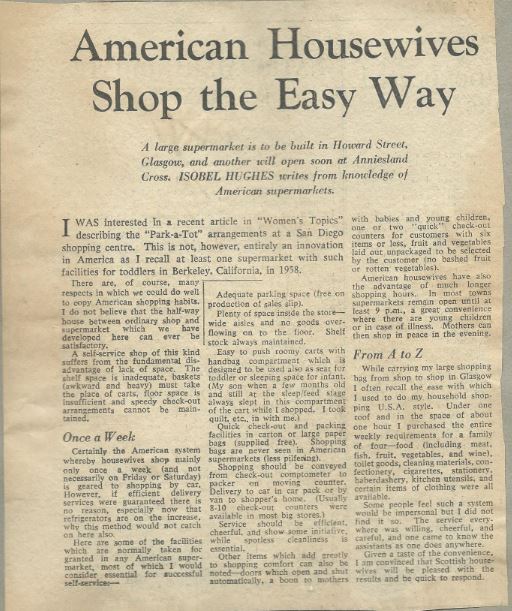 The author draws a contrast between the space and efficiency of the American set up and the compromises and time consuming activities needed for food shopping and in shops in Britain. She rightly focuses on the issues of parking, sales space and merchandising, trollies (carts) and their design, speedy checkouts and packing and store standards, as well as other aspects we take for granted now such as automatic doors, express checkouts and hours of opening.

Many people criticise the modern supermarket, but often from a contemporary standpoint – and there are issues without doubt. But, what this 54 year old article shows is the contrast in the minds of a consumer who had experienced both systems and the clear advantages for her of the coming retail supermarket revolution in the UK. Sometimes it is said we use supermarkets because we have no other choice; the contrast drawn here points to some very different contemporary competitive reasons which made the new formats a rational choice of the time. The article captures a moment of retail, change and the consumer desires that helped drive it.

A second aspect of the article however also caught my eye and that was the comment that a large supermarket was to be built in Howard Street, Glasgow (and another at Anniesland Cross). The premise of the article was really whether this would catch on with Glasgow shoppers. And it made me wonder what happened?

So another quick bit of research/Googling led me to a fascinating blog entry – if nothing else its title (I might have a glass of beer) caught my eye. The author tells the story of a shop in Howard Street, which I believe is the one referred to in the clipping. The blog reproduces some historical photos of the shop and the street, mainly taken from the Mitchell Library Virtual Mitchell project site – and I embed them from there below. The long story before the 1960s is of interest, but it is the retail change in the 1960s and onwards that interested me.

In 1964 the shop was Coopers (a long standing Scottish food business which was by then part of Associated British Foods, along with Fine Fare etc) and the store was part of an 1867 Greek Thomson building occupying the block (Photos #1, #2 and #3). This seems to be the site of the large supermarket mentioned in the cutting. It seems that it did not open until 1965/6 (good to see speedy planning in those days!) when, as the photos show, the Greek Thomson building was taken down in pieces and a modern block put up in its place (Photo #4). Over the decades this shop was a Coopers, Fine Fare (possibly), Gateway and Somerfield (Photo #7). The store closed in 2011 it appears (after Somerfield was taken over by the Co-operative Group) and the block is now rather dilapidated (as the latest Google Street views show),with the retail part occupied by a St Margaret of Scotland Hospice Charity Shop (Photos #5 and #6).

My Googling also drew me to the Dictionary of Scottish Architects, in which it appears that the architect of this new store was Michael Beale, working for Walter Underwood and partners. Michael Beale has an interesting story and seems to have done quite a lot of retail work, including the Fine Fare in Stirling (which was my local store for a while when I first moved up to Stirling and which I believe was arguably the first “superstore” in Scotland) and early involvement in the Thistle Centre development in Stirling.

The store in Howard Street – the large supermarket – is identified in these records as being of 13,000 sq ft and seems to have opened in 1965 or possibly 1966 (there may be a contradiction in dates in the various sources). The fact it was still going some 45 years later, albeit through various incarnations, is of interest, though its current state shows how things have changed. A store of that size is no longer seen as unusual of course and consumer trends have altered (including some evidence of a renaissance in some places of cross shopping a range of smaller local stores)

I have said little about Anniesland Cross as I could find little out. It is the site of a large Morrisons today, rebranded from a Safeway Scottish flagship store, but I do not know if this is on the same site as Isobel Hughes mentioned in the cutting. Beale certainly was involved as an architect on Fine Fare and Safeway stores of that time, so this modern store could be a replacement for “his” store. Anne Findlay recalls a Templeton store there as a child, and this might be that development mentioned in the clipping.

If anyone can spend more time and do some “real” research or can generally shed more light on this store in Howard Street in the 1960s and later, or at Anniesland Cross, then please get in touch.

A final thought: in my recent blog on Woolworths I tried to make a point about architecture and streetscape and the way some retailers really made statements through their stores. In my meanderings around Cooper & Co I came across the following internal (the photo is form the 1890s) and external (the photo is from the 1970s) shots of their original Great Western Road store. The building still stands. We don’t make grocery store buildings like that any more; functionality as exemplified in the US supermarket revolution has become the order of the day – as perhaps predicted in the clipping. 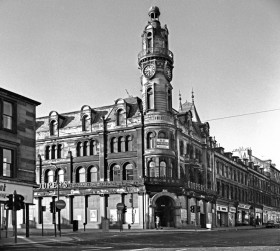 2 Responses to Retail change and why we fell in love with supermarkets?