“Places of Possibility; Spaces of Opportunity”

It was with the phrase “Places of Possibility; Spaces of Opportunity” that we ended Julian Dobson’s tour de force on “How to Save our Town Centres” last Wednesday. His presentation and Scottish book launch to a full Storytelling centre in Edinburgh was at the heart of Scotland Towns Partnership “Day for Towns”. The full day comprised STP’s quarterly Board meeting, a networking Tea Party, STP’s AGM, Julian’s presentation and conversation and finally the Cross Party Group on Towns and Towns Centres at the Scottish Parliament. The AGM and the Cross Party Group saw their largest ever attendances, hopefully pointing to the renewed interest, enthusiasm and action for Scotland’s Towns.

The Board meeting, was just that; a reflection on the work of the last three months and forward planning for the next year. The launch of STP’s new website, incorporating the Understanding Scottish Places and the Town Centre Toolkit work has been a major step forward, but is one of many actions tying together and networking the towns community.

Cakes and scones welcomed members and others to the AGM and provided a useful space for individual and group networking. The AGM itself passed quickly as members reflected on a busy year with some real successes.

The main part of the afternoon was the presentation by Julian Dobson on themes from his book “How to Save our Town Centres”. Starting with the Nottingham Great Cheese Riot of 1766 (go on, you know you want to google it – other search engines are available of course) Julian pointed out the long history of change and contested space around the centres of our towns. He also pointed to the original crowdfunding (how much of our towns’ civic space is erected by ‘public subscription’?) and the pride in place that we have always had.

But this localism has been lost, in Julian’s view by the way in which we have come to consume land and space and the way in which property speculation and gains have been allowed to run riot. When investors have no sense of place or real stake in a town, then why should we expect them to modify their behaviours to support and develop the social, cultural and economic assets of that place?

The presentation, sans powerpoint but with a selection of props as befits speaking in The Scottish Storytelling Centre, generated a long and animated discussion with the audience, which could have gone on much longer, and did in smaller groups. (As an aside I do think The Storytelling Centre (guess the architect?) is a fabulous space, and ranks with the Carnegie Building in Dunfermline as one of my favourite modern buildings). 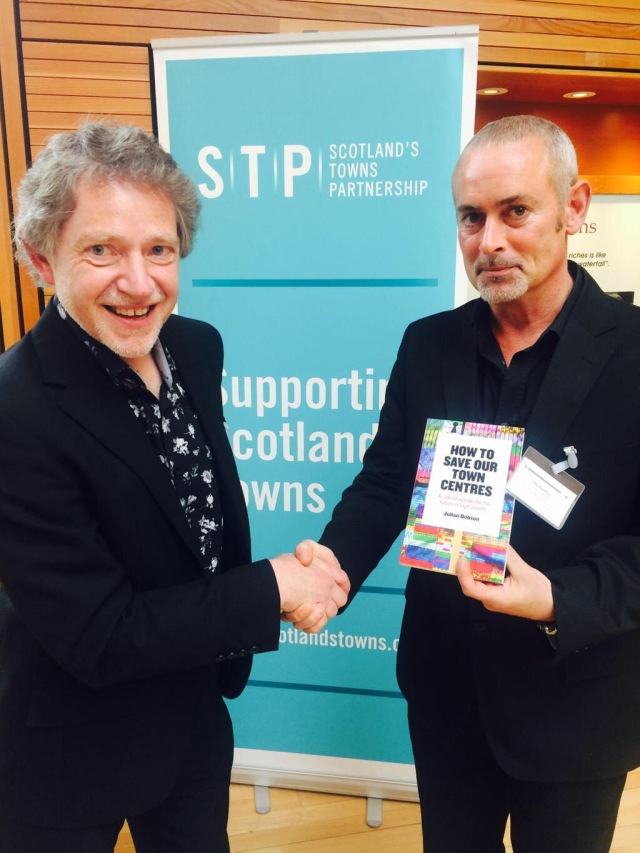 Quite a few of the audience did drag themselves away from conversations to wander down the Royal Mile to the Parliament for the Cross Party Group convened by Margaret McCulloch MSP. Here we heard from Andy Godfrey of Alliance Boots on the changing role of retailing in towns and from Diarmaid Lawlor (A+DS) on Towns Purpose. Andy made a plea to recognise the role of retailing in town centres, which he felt might be being sidelined. Diarmaid Lawlor (must have been a little off colour as he failed to swear once) in an as ever passionate speech on place asked (no, commanded) us to think about the purpose of towns and to ensure that we tore down barriers to delivering this purpose at a local level. As he said “The town centre is one of the few concepts of shared space that people get” and we ought to get it right. Finally, Phil Prentice from STP summarised activity and progress against the themes of the Town Centre Action Plan, which is perhaps a topic for another post.

For me, and yes I recognize I am hopelessly compromised in this as Chair of STP, the day was a resounding success. We are making strong progress and the day as a whole was marked by positivity about the things going on and the places being energized by these activities. It is the start of something rather than the end, and we do still have a long way to go, but Scotland’s Towns are coming together and changing their fortunes, place by place, in a way we have not seen for quite some time. You can watch this space and/or get involved locally or nationally – places of possibility; spaces of opportunity.