Attempting to chair such an event means that the details get a little lost in the blur of speakers and timings, so these personal comments are inevitably impressions and quick responses.

The overall sense I got from the stage and from mingling with participants was a phenomenal sense of energy and buzz. From the very opening to the reception at the end,  participants were fully engaged and enthused with what is going on in Scotland’s Towns. There was a real sense of opportunity and ambition in the air.

Paisley of course has in many ways become synonymous with the adverse implications of change. But from the Leader of Renfrewshire Council’s welcome, through a couple of short presentations on the ambition and re-energisation underway in Paisley, and including the excellent conference setting of the Town Hall and Abbey, Paisley lived up to the conference strapline ‘proud past, positive future’.

Derek Mackay, the Towns Minister, kept his promise (no, not a vow) to come and present the Town Centre Action Plan one year on. In a wide-ranging, comprehensive  and as it turned out, valedictory address he laid out the actions underway to re-think Scotland’s Towns. His move to be Minister for Transport and the Islands, means he will be a tough act to follow.

The ethos of the conference this year was about sharing and learning and the day was structured around very short presentations, discussion tables, drop-in focused topic tables, panel debates and interaction. It is hard to pick out highlights, but Gerard Finnegan on Derry’s journey and Claudia Zielske’s tour de force on what ‘the town is the venue’ really means in Huntly stood out for me. The digital panel debate looking to the future for towns and the energising discussion of what ‘entrepreneur’ should mean in a local authority and public sector context also promoted much response and interaction.

The final session of the day was indeed a bit different as David Chapman explored urban design and townscapes in Northern Sweden, where annual temperature fluctuations are between -30° and +30°C. Showing just how we need to ‘work with, not against the environment’ he gave much food for thought, though his idea of an ice lecture theatre for next year’s conference is not one we will be taking on.

All conferences require strong supporters and Land Engineering deserves thanks as the principal sponsors as do the main partners Renfrewshire Council and the Scottish Government. Fringe events were organised by Springboard, Heritage Lottery Fund, Swipii and William Hill and a range of other supporters and exhibitors also lent support and finance. Thanks to all.

Further thoughts from the conference will appear on the STP’s website in due course, and a summary film and Storify are under preparation. Various participants tweeted during the day (many thanks) and everything can be viewed at #STC14.

The proof of any success of any such event is not the day itself but the lasting connections and activities it generates across communities in Scotland. If the conference buzz is anything to go by, then Scotland’s towns will be more interesting places in the coming years.

And if you’ve not been to Paisley in a while, go there and keep an eye on what’s going on. 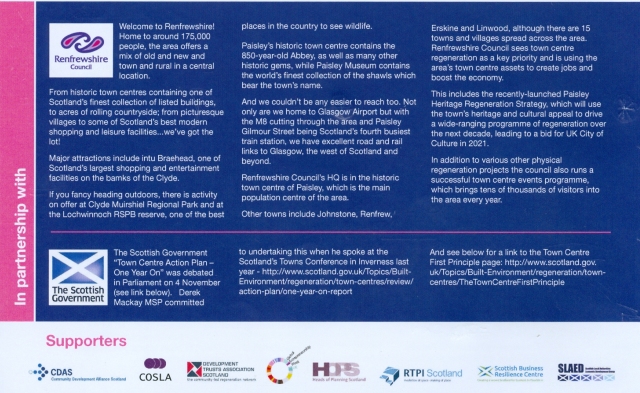