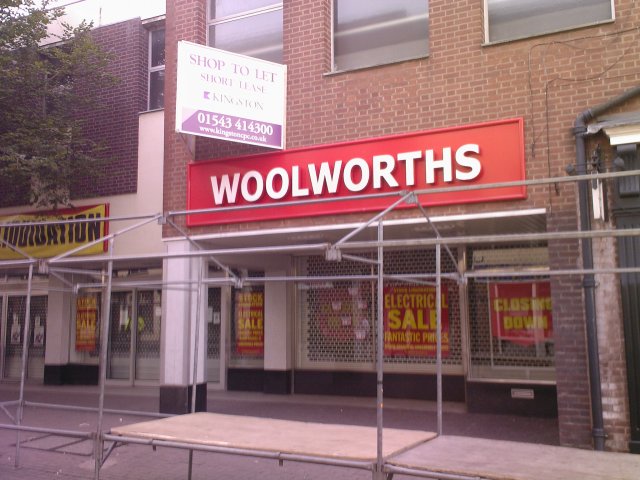 They say time flies when you’re having fun; so it really should have dragged over the last few years through the deepest recession in living memory.  But it really doesn’t seem like five years (FIVE YEARS) this week since Woolworth shut its doors.  But, yes, Woolworths went into administration on the 26th November 2008.

When Woolworths shut up shop, there was an almost national outpouring of grief. How would we survive?  As the UK’s eighth largest retailer, with £2 billion of sales in 2008, Woolworths was a significant business (#1 in sweets and chocolates, #2 in entertainment and toys, #4 in homewares and #5 in children’s clothes), still attracting many customers, and there was real shock, upset and anger for many, not least the employees.  Some sought to carry on the name (Shop Direct purchased the rights to the name and trade online as Woolworths.co.uk), the brands (Shop Direct also bought Ladybird, Home Retail (Argos) bought Chad Valley) or the approach (e.g. the copy-cat Alworths).  Others though, simply expanded their business into the physical and/or market space Woolworths had occupied.  Not all of Woolworths £2 billion per annum sales have been recouped by the competition, but there is no doubt the failure of Woolworths provided an opportunity for others.

The loss of Woolies produced a physical void on the high street (now mainly filled in) but also, as so clearly seen in the press at the time, an emotional void.

But let’s pause and be a little more objective.  The table shows CEO comments in the annual report over a quarter of a century:

Woolworths was not a failure or signifier due to the recession, but rather had been a business a long time in its death throes.  And the grief really for many customers was a reflection of their nostalgia and not the reality of their behaviours, as the figures above suggest.

For the employees of course it was a far different and far more bitter story.

The indefatigable Graham Soult has been keeping the flame/memory of old Woolies stores (mainly but not only in the North East) alive and has produced some fascinating images and details of previous stores and locations (@soult is worth following for mentions of Woolies and old stores everywhere – amongst other things).

And while the hard-headed analyst in me says so what do you expect if you lose 70% of your customer base, the romantic does hark back to my memories and nostalgia for Woolies in Bridgend and Cardiff – and perhaps the certainty they embodied (bit odd really given they only arrived here in 1909). Maybe it was simply the floor, the smell and the pick’n’mix?

But is that pull of the past going out of fashion?  If, and let’s not hope so, say Poundland collapsed (and Poundland is what Woolies needed to become more like, as I’ve said before), would we be collecting and swapping old pictures and memories of their old stores and shops?  I somehow doubt so (unless you’re a retail academic perhaps!). And that’s the Wonder of Woolies.

I am Professor of Retail Studies at the Institute for Retail Studies, University of Stirling, where I research and teach aspects of retailing and retail supply chains, alongside various colleagues. I am Chair of Scotland's Towns Partnership. I am also a Deputy Principal of the University, with responsibility for Education and Students.
View all posts by Leigh Sparks →
This entry was posted in Closure, Historic Shops, Pound Shops, Retail History, Woolworths and tagged Closure, History, Nostalgia, Woolworths. Bookmark the permalink.

7 Responses to Woolies Five years On