A year or so I was invited to become part of an online community – Brick meets Click (BMC) – which discusses and comments on interesting things in the world of retailing and technology and looks at the future of shopping. It’s been an experience I’ve enjoyed and I have learned a lot about aspects of the digital, social and shopping revolution we are living through. I am not sure I have contributed much in return but I keep being allowed to post there, and they describe me as a Black Belt, so it can’t be all bad.

If you have not come across BMC and are interested in this area, then you should check them out online and on Twitter (@BrickmeetsClick).

Recently BMC went back to the future with a piece on Clarence Saunders –  the inventor of the supermarket in 1916 with Piggly Wiggly (what should we do for the anniversary?) – as part of a sequence of blogs about the automated supermarket. 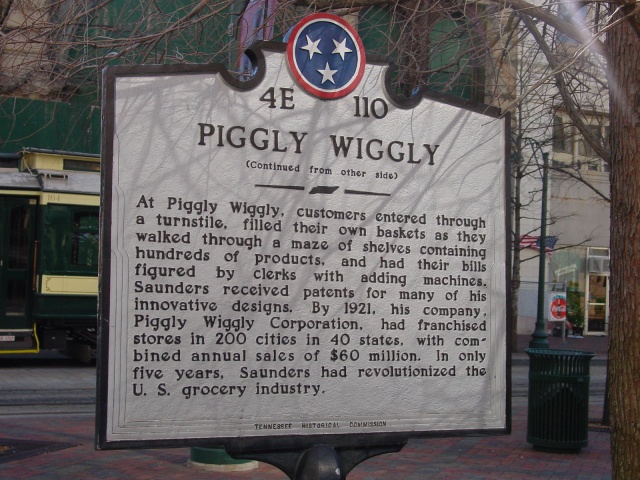 It was not so much the origins of Piggly Wiggly that was the focus of the piece, but rather Saunders’ later attempt to develop an automated supermarket – which he called Keedoozle. Now clearly Saunders had a penchant for strange names for retail stores, but Keedoozle is rather an odd one. But more interestingly, on the excellent blog post is a fascinating video clip from PBS in Memphis which includes some film of what this automated supermarket actually looked like inside. It also goes on to explain why this revolution was one that did not take off.

Or is it simply that Clarence Saunders was too far ahead of his time.

Watching the video I was reminded of the recent virtual shopping walls trialled by Samsung-Tesco in Korea and elsewhere, and now being trialled by others. The concept of “endless aisles” in stores by such virtual technology and smartphone is close to reality and is being adopted by some consumers – and definitely so at home. The phone gets over some of the problems Saunders had, and with delivery or click and collect now working and with the advances in technology, has his vision been realised? Albeit in a very different form.

And that different form is the subject of two other recent blog posts on BMC – by John Lert (John Lert founded CasePick Systems, LLC (now known as Symbotic) where his team developed state-of-the-art automation technology for distribution centers. He is now pursuing the development of the “each-picking” technology that will enable the automated supermarket concept to be realized) on the subject of the automated supermarket. The debate that has followed these posts (Part One and Part Two) is also worth looking at.

This vision of an automated supermarket, which thus stretched back to the 1940s and Clarence Saunders, brought two things to mind.

The first was Henry Ford. Some 20 or so years ago Paul Freathy and myself produced a short working paper on Henry Ford and the supermarket based on his experimentation with his retail commissaries and some work Stan Hollander had done on these. We later published an article in the Irish Marketing Review. Whilst not a fully automated store, this used Ford’s manufacturing principles in a retail setting.

And secondly, I thought of Tesco’s “dark stores” – outlets that have no real customers but deliver online (grocery) orders. Four such stores are now open around London delivering Tesco say some 80% of online orders in the area. The company’s recent reports talk about revised operations, automation and high productivity in these “dark stores” and the pictures I have seen have interesting similarities to some of the Ford and as it now appears Saunders’ ideas.

The blogs on the future of the automated supermarket are  thought provoking about what is possible and what might work – customer acceptance of course being needed. It is clear that we are living through a deep restructuring of aspects of shopping and retailing, but that some of the ideas now being implemented owe a great deal to some perhaps forgotten (in this context) pioneers and visionaries of the past.

I am Professor of Retail Studies at the Institute for Retail Studies, University of Stirling, where I research and teach aspects of retailing and retail supply chains, alongside various colleagues. I am Chair of Scotland's Towns Partnership. I am also a Deputy Principal of the University, with responsibility for Education and Students.
View all posts by Leigh Sparks →
This entry was posted in Automation, Click and Collect, Consumer Change, Dark Stores, Food Retailing, History, Multichannel, Online Retailing, Retail History, Supermarket, USA and tagged Automation, Click and Collect, Dark Stores, History, Keedoozle, Piggly Wiggly, Supermarket, Tesco. Bookmark the permalink.

2 Responses to Clarence Saunders and Keedoozle