It wasn’t a Christmas present but rather a book that I’d bought in the summer but had never found the space to read. Yet the time seemed right, with the continuing high standing of John Lewis and the expansionary trail of Waitrose, due to reach Stirling in the early months of 2013, and the stellar sales figures announced over Christmas 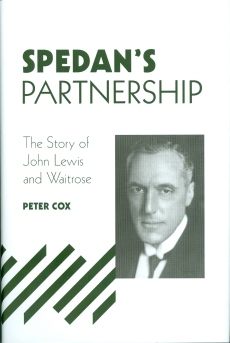 Peter Cox is an insider, and this volume, whilst not an authorised history, has benefitted from this internal knowledge, his interviewees and access to the Partnership archive. It joins a list of books about the Partnership, including of course a couple by Spedan Lewis himself, and arrives at a time when the excesses and failures of traditional capitalist governance, ownership and operational models have prompted searches for alternatives; a comparison rather often pointed out by the author.

Organised chronologically until a couple of reflective chapters at the end, the volume tells the story of the people, practices and companies of the John Lewis Partnership. It does not gloss over their foibles and problems and presents a picture of struggle and debate over the principles and practicalities of retail life and competition. It is a good read, well illustrated  and thought provoking about people’s capabilities and capacities, mores of the various times and about models of corporate governance and control.

I had forgotten the difficult family issues between the eponymous John Lewis and his sons; as I had the Peter Jones/John Lewis schism. I was sort of aware of the long gestation of the Spedan Lewis’ ideas for the Partnership, but not its emerging difficulties of operation. The search for very high calibre (women as well as the customary men) University graduates (and thus a Bletchley Park/Government link around the Second World War) was news to me. The lack of development of Waitrose until very recently and the frequent questioning of its presence, value and future in the Partnership is well explained.

However the most revealing piece of the book for me is not about the Partnership model, but the story of the bombing of the John Lewis on Oxford Street in 1940. That it was bombed is not the point; though blaming the BBC seems a little harsh (though perhaps in tune with today’s times). It is the fact that the store was not fully rebuilt until 1960 that is so telling about the long post-war problems of redevelopment and the damage and costs to businesses and people that this caused. The controls, need for licences, and the lack of building materials blighted so many for so long and destroyed many livelihoods. (Possibly I am too attuned to this, being involved in research on another retail business that suffered badly from the War).

Waitrose and John Lewis are today highly respected and admired, successful, entrepreneurial and expansionary businesses. Peter Cox’s story does justice to those that have gone before, the decisions they took both generally and in sticking to rather different paths and principles, and the changing nature of retailing in the 20th and now the 21st century.

Peter Cox (2010) Spedan’s Partnership: the story of John Lewis and Waitrose, Labatie Books, is available from good book stores, or if you want to support tax avoidance, Amazon.

I am Professor of Retail Studies at the Institute for Retail Studies, University of Stirling, where I research and teach aspects of retailing and retail supply chains, alongside various colleagues. I am Chair of Scotland's Towns Partnership. I am also a Deputy Principal of the University, with responsibility for Education and Students.
View all posts by Leigh Sparks →
This entry was posted in Books, Department Stores, Jphn Lewis Partnership, Retail History, Waitrose and tagged Department Stores, JLP, Retail History, Waitrose. Bookmark the permalink.