A quarter of a century or so ago I was fortunate enough to be awarded a Winston Churchill Memorial Trust Travelling Fellowship.  As part of that I ended up in Seattle and interviewed various executives and family from Nordstrom, the successful US high service department store.  It rained.

One of the good things about being an academic is the occasional ability to travel.  So last week I was in Seattle again, this time for an American Collegiate Retailing Association/American Marketing Association conference on retailing.  Many things have changed in the interval, not least Seattle’s Microsoft, Amazon and Starbucks conquering the world.  The sun also shone – global warming I expect.

One of the industry speakers at the conference was Director of Strategy from Nordstrom.  She spoke on the attempts that Nordstrom are making to redefine and extend in-store service and replicate online their legendary store customer service approach.  A tough challenge in a rapidly changing market.  Interestingly she saw 80% of future growth to 2020 for Nordstrom coming from non-store retailing.

Service was also the theme of a different retailer, the Seattle-founded consumer co-operative REI.  The Tiso Outdoor Experience in Scotland is the downsized imitation of REI.  The Seattle store we visited had all the usual REI elements; good staff, huge product range and the well-known experiential elements such as the cycle test track, 65ft indoor climbing pinnacle and boot tryout trails, amongst others. 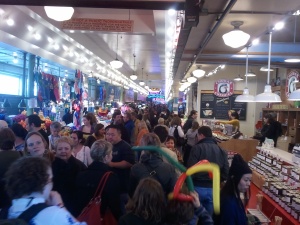 And then there is Seattle’s Pike Place Market, one of the oldest still trading farmers markets in the US, proudly still carrying the slogan ‘Meet the Producers’.  Founded in 1907 it can feel like a tourist attraction, but also boasts a very strong, loyal, local following.  It was this local base that saved the market from demolition in the 1970’s, supported its inclusion of craft businesses in the 1980’s and is currently behind the city’s extensive renovation of the market.

Pike Place is a rabbit warren of stalls and vendors with amongst many other things, great local food for on or off site consumption.  Fabulous flower stalls mix with ‘flying fish’ in great visual displays of local produce.  The first ever Starbucks also opened at the market;  you can make your own mind up how much of a good thing that was.

A great success these days, it is easy to forget how close Seattle came to losing this heart of its city.  Tearing down “old” things like markets and undervaluing their deeper significance, linkages and potential is an all too common refrain.  Protecting core values whether customer service, experiential retailing or historic local rural-urban linkages, requires commitment and belief often over a long period of time.

Bringing it back home, why is Seattle known for these retail businesses and places (whether the dynamic start-ups that became Amazon and Starbucks or the experiences, albeit very different, of REI, Nordstrom and Pike Place) and, say Edinburgh, Glasgow or Aberdeen are not?  Far too many Scottish cities have lacked a commitment to place and (small) business growth; this needs to be re-ignited.

I am Professor of Retail Studies at the Institute for Retail Studies, University of Stirling, where I research and teach aspects of retailing and retail supply chains, alongside various colleagues. I am Chair of Scotland's Towns Partnership. I am also a Deputy Principal of the University, with responsibility for Education and Students.
View all posts by Leigh Sparks →
This entry was posted in Community Co-operatives, Customer Service, Farmers Markets, Start-ups and tagged Nordstrom, Pike Place, REI, Retailing, Seattle, Starbucks. Bookmark the permalink.