There comes a point where even I, with my inbuilt Welsh pessimism (except when playing Scotland at rugby), get fed up with the bad news. But here we go again. The Scottish Retail Sales Monitor reporting on retail sales in January 2012 are headlined “The worst Scottish sales fall since at least 1999”. Is it me or has that been pretty much the headline for the last year or so?

Scottish sales, especially in non-food in January, have gone off a cliff. They are substantially worse than the rest of the UK. Scottish Government claims of being supportive to retailing and doing everything they can to bolster consumers do not seem to be producing the results.

However you look at it, these figures are dreadful, but for me most worrying is the continued and sustained underperformance of the Scottish sales figures. This has been the developing story since the end of the English recession, but the gap seems to have widened in recent months. 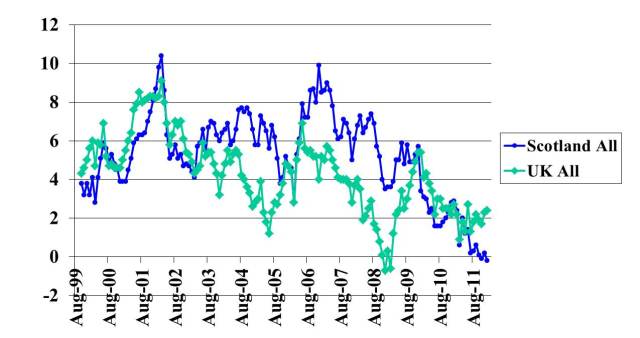 We all suspected that there would be a hangover post Christmas, but this is now even more worrying than we thought for retailers and retail spaces across Scotland.

The only thing that gives me some pause for thought in looking at these figures is the question of internet and online sales. As far as I understand it, there is an issue over the extent to which internet sales by Scottish consumers are booked and recorded as being Scottish (or indeed should be). On the surface it looks as though UK internet sales would be in the UK data used here, but that Scottish internet sales are not.

Does this matter? Well if this is a measure of retail activity in Scotland then they should be included. Are click and collect sales to be recorded to the head office address for example as “sold” through the central website, or to the (Scottish) store? Does this vary by retailer? There may also be issues of comparability if internet sales, which might be delivered through Scottish shops (or done directly) are recorded in the UK figures. Likewise however, I wonder how Amazon at Dunfermline might be treated if it was to be included (and in passing how resellers would need to be captured), given that they “sell” to and deliver outside Scotland.

Yet another example of how the internet is changing how we think about and report and record retail sales and consumer activity – and that going nowhere near e-Bay yet.

Please forgive the slight digression into internet sales and stats, but these retail sales figures are scary enough on any day, let alone my birthday!

I am Professor of Retail Studies at the Institute for Retail Studies, University of Stirling, where I research and teach aspects of retailing and retail supply chains, alongside various colleagues. I am Chair of Scotland's Towns Partnership. I am also a Deputy Principal of the University, with responsibility for Education and Students.
View all posts by Leigh Sparks →
This entry was posted in Consumers, Internet shopping, Retail Economy, Scottish Retail Sales and tagged Consumer Confidence, Internet, Scotland, Scottish Retail Sales Monitor. Bookmark the permalink.