Just back from my latest travails. This time to Singapore where the IRS signed a new agreement for scholarships for our undergraduate retail degree. The Singapore Workforce Development Agency are sponsoring 90 scholarships over 3 years at an investment of S$3m. I also took part in our University graduation ceremony which saw PhD, MBA and Retail marketing undergraduates graduate, and spent time teaching on our Diploma in Retailing programme (we offer Diploma. Undergraduate and MBA in Retailing degrees in Singapore). 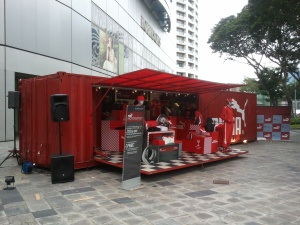 So what happened when I was away? A couple of things registered via messages or emails:

* The August retail sales figures for Scotland confirmed the fears some (including me) have been expressing for a while now; the recession is nowhere near over. The figures were amongst the worst ever recorded (again) by the Scottish RetaiL Consortium series;

*The waste mountain generated supposedly by the confusion amongst sell by, use by, best before and other dates is all the fault of the retailers. I don’t quite understand this – there is confusion for sure, but is it really all the retailers’ fault? Consumers need education and clarity and a willingness to see, smell or taste if food is going off.

A boat? A plane? Louis Vuitton's new flagship in Singapore - just in time for the F1 Grand Prix

So that’s me caught up then. But, a figure from Singapore keeps intruding – recorded retail sales growth of c10% per annum is seen as normal and acceptable. And this from a country that is far from cheap these days.

So how do we catch up with that?

Well investment in education and the workforce might be a part of it (though I would say that wouldn’t I!).  But it is about attitude and approach as well. Two instances:

*When the credit crunch hit a few years ago, Singapore expanded the numbers going into University and Polytechnics to seize the opportunity to add skills to the workforce (and to ‘mop-up’ youth unemployment). And the UK? Citing the looming deficit we decided to cut numbers and to raise costs and fees for students.

Let’s guess the economic and social impacts of these two approaches? Some way to go to catch up perhaps.

I am Professor of Retail Studies at the Institute for Retail Studies, University of Stirling, where I research and teach aspects of retailing and retail supply chains, alongside various colleagues. I am Chair of Scotland's Towns Partnership. I am also a Deputy Principal of the University, with responsibility for Education and Students.
View all posts by Leigh Sparks →
This entry was posted in Consumers, Education, Food, Government, International Retailing, Pop-Up Shops, Retail Economy, Scottish Retail Sales, Uncategorized, Waste and tagged . education, Louis Vuitton, pop-up stores, Puma, Recession, retail degree, Retail Sales, Scotland, Singapore. Bookmark the permalink.